This pudding born from all these combinations. Furthermore, I added something personal as gianduja chocolate and salted butter, about which I tweeted those days with Un tocco di zenzero, and something from my region, Friuli, and from my modest role of #winetutor for Tirebouchon.

It’s now time for the recipe of the Chocolate Pear Pudding revisited with Ramandolo. In bold text you find my adaptation of the original Nigella’s recipe. 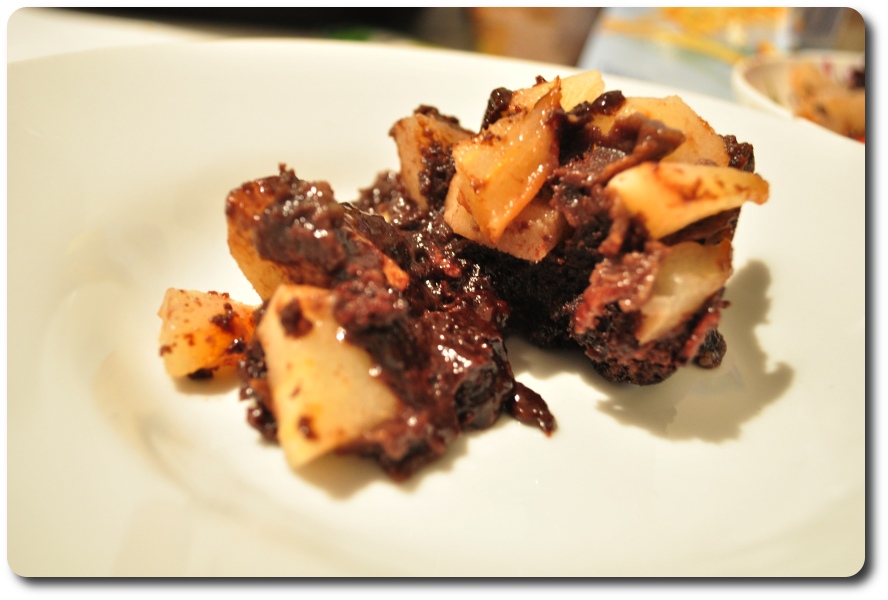 I peel and cut in 8 parts pears (almost 500 gr). Then I dice them. I grease a 20cm ovenproof dish (I had a round cake pan) with butter. I arrange pears on the base of the dish (or cake pan).

I work together butter, flour, sugar, cocoa and chocolate. Then I add eggs and soon after Ramandolo wine. I work all well till to obtain an homogeneous black butter.

I spread the brown batter over the pears, and bake in the oven for 35 minutes.

I serve the pudding in dishes.

It’s a pudding, not a cake. It will seduce your guests as mine from the moment you put it in the oven. I sister conquered me saying:

“Why did you want to bring me to a restaurant? That dinner with Bonci’s pizza and chocolate pudding is so perfect”

Thanks to all those that even unconsciously contributed to my Chocolate Pear Pudding with Ramandolo.
Now it’s your turn to contribute partecipating to Forever Nigella #2 Seduced by chocolate.
Deadline: 20th February 2011