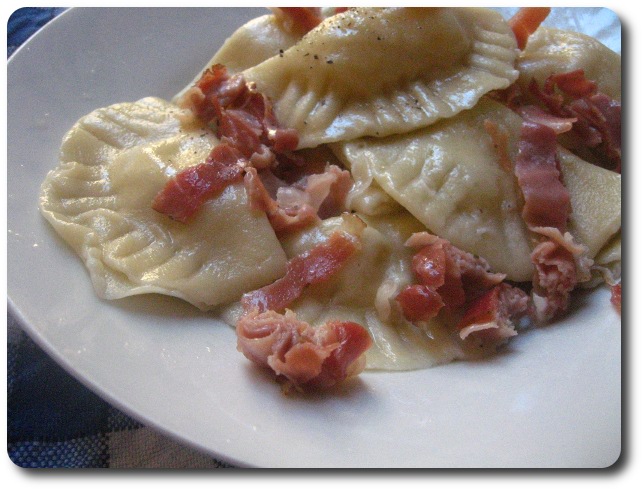 What is it? It was my first reaction at receiving the Daring Kitchen email. Then, I learn that they are a sort of Ravioli. I’m Italian and so I have the bad habit to relate foreign kitchen to local traditions 🙂 But I regained almost immediatly my rational side: I’m a proud member of Daring Kitchen and I want to learn more about cooking. So, what am I awaiting to try the Pierogi recipe proposed by LizG of Bits n’ Bites and Anula of Anula’s Kitchen.

Pierogi, in case you don’t know them as me, are a traditional first course, salty or sweet, of Eastern Europe. My Polish friend, Agnieszka, told me that in her family they are usually filled with bluberries of strawberries and sugar or potatoes with cheese and onions. If they are sweety, they are served with cream. While for salty pierogi, she advised me to prefer butter and pancetta or even speck.

I decided to point to the more traditional version with potatoes and cheese. Anyway, I tried to put in them some of my life. So for cheese I choose, instead of feta as suggested by Agnieszka, Pecorino Romano and i served them with speck. Furthermore, in the filling I added some pepper, in order to keep to mind the potatoes in the pot, typical recipe of the Italian region where I growned up (Friuli Venezia Giulia). So my recipe mixed Polish recipe with Pecorino from Rome, where I live, Speck and pepper in order to remind Friuli.

I tried twice the recipe. I served it at home for dinner and for lunch. Being in two, the dose was perfect for two times. The filling was abundant, at the end.

Pierogi and Ravioli: what’s the different?

It’s different the recipe of the dought. In Pierogi both egg and water is used. While in pasta all’uovo, used form make Ravioli, only eggs. I noticed a higher percentage of flour in Pierogi respect to Pasta all’uovo (Egg dough). Different balance among ingredients means a different dough. The Pierogi’s one is more closed in its consistency to Strudel dough than to Ravioli.

I placed flour in a large bowl. Then I added one egg, salt. I began to work with hand put a little water at a time. Iworked the dough for some minutes (5 minutes). I covered the dough in the bowl wiht a towel. After one hour I divided the dough in two parts, one for dinner and one for the day after lunch. The second one was put in the fridge.

I boiled potatoes. Then I peeled them and mashed. I mixed potatoes with diced shallot and Pecorino Romano. Finally, I added pepper.

On a floured work surface, I rolled the dough thinly, almost 3 mm using a wood rolling pin. Then with a glass, I cut pierogi. 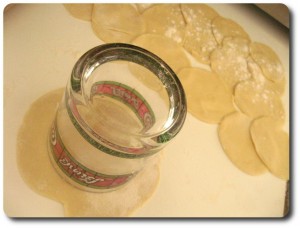 Inside each of them, i put a spoon, not full, of filling. It’s more easy if you use directly hands 🙂 Then, I folded dough in half and I pinched edges together. I used also a fork to decorate pierogis. 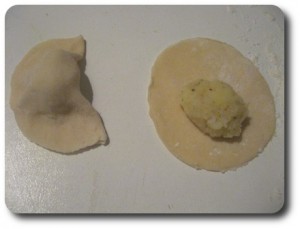 In a saucepan with boiling water, I put pierogi (not all in one time, be patient) and cooked them till they rise to surface. 3-5 minutes of cooking are enough.

4 slices of Speck cut in pieces

Then, I put them in a pot where I already warmed butter with Speck. After 1-2 minutes in the pot, I transfered pierogi in dished and decorated them with Speck and abundant pepper.