Could be possible to taste for the first time a legume at 32 years old?

Luckily it’s possible. I have to thanks first of all the Italian food-forum Coquinaria and the Blog Event entitled to My Legume Love Affair hosted this month by Nourish me . See also the blog of Susan , who created the event.

During the year Coquinaria’s members meet to share more than just recipes. One year ago I met them in Tarquinia, pretty closed to Rome, and with some incredulity I bought the “Fagiolina del Trasimeno”, a Slow Food protected typical food (in Italian,”presidio”). At that time I wasn’t yet so much in love with legumes…But now, and now after having tasted it, I’m definitely one legume lover.

Starting from barley, passing through farro (mainly Farro del Pungolo, another typical product from Viterbo province in Lazio Region, relatively closed to Rome), I’ve arrived to Fagiolina del Trasimeno. Fagionalina means more or less little bean, while Trasimeno is a lake in central Italy. It’s famous for being really tasting, and I can prove that.

The bean is small, not so different in dimension from a rice grain. Till 1970 it was regularly grown all around Trasimeno Lake, especially in Castiglione del lago, Passignano e Tuoro villages. Fagiolina del Trasimeno needs a huge amount of water and it’s sensitive to diseases and even moles and earthworms loved it. It requires many attentions.

Usually the producers are family based firm with a maximum of 3 workes and cultivate about 7-8 quintals of Fagiolina a year. It’s estimated, by Slow Food, that to produce just one quintal are required 570 hours of human labour.

Fagiolina del Trasimeno is perfect for simple recipes, just boiled or with tomatoes and basilico. While it’s to avoid the temptation to do a soup with it because in puree version it loose most of its nutritional components. Anyway online it’s available (in Italian) a really inviting recipe proposed by Un tocco di zenzero .

Fagiolina del Trasimeno, whose scientific name is Vigna unguicolata, has a history starting in Africa before to arrive in Umbria (Italy). Teofasto, student of Aristotele, provide evidence of its use in 300 B.C. in Greece. In first centuary A.D., Plinio Il Vecchio demonstrated it presence in the Etruscan and Roman society.

Being out of Rome during the weekend, relaxing with my beloved Guineapig, having time to boil the Fagiolina, I brought it with us in the countryside home. Simple is better and so my basic recipe. But the result was really astonishing. 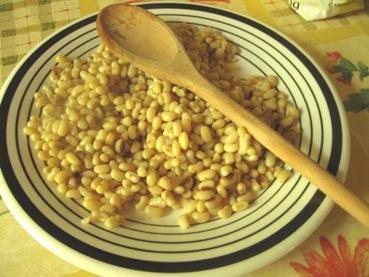 Boil the Fagiolina in cold unsalted water for about 30 min, then add salt and laurel and cook for other 20 min.

When it’s ready, taste it with just olive oil. The taste is so excellent that no more spices are necessary, but you’re free to try.

Slow Food , here you can find a list of current producers

Where the Fagiolina I used come from